I wonder if our education system really prepared me for the real world.  3 things that bother me:

In  my mother’s house, there’s a vast collection of small, medium and large gold trophies with little girls in action.  They’re swimming, holding a bat and getting ready to shoot a free throw.  There’s also a box of multicolored ribbons, a binder of Certificates of Excellence and the occasional newspaper article mentioning my name.

Sounds impressive, right?  It’s an illusion.  It’s years of “awards” for participation, for showing up and for not quitting.  Some kids collected bugs, stuffed animals or comic books.  Me?  I collected awards.  My collection hasn’t had a new addition in a really long time…

It takes a lot of drive, determination and passion to be a winner and, often, a lot of failed attempts.   As a kid, I wasn’t competing out of passion.  I was competing to win a trophy – a plastic, gold-colored dust-collector.

“Gimme dat trophy….”  was the mindset.

In my head this mantra is set to the tune of “Gimme Dat Oscar”, a gangsta rap skit from Mad TV.  They did a spoof on Forrest Whitaker’s nomination for the Oscar in 2006 for his role as Idi Amin in “The Last King of Scotland”.  Hysterical clip – check it out:

I fall somewhere in between Generation X and Generation Y, which apparently, is also called the “Trophy Generation”.  Both Ron Alsop and Bruce Tulgan have written books using this term to descibe children who are so used to being awarded that they may be ill-prepared to excel in the corporate environment. 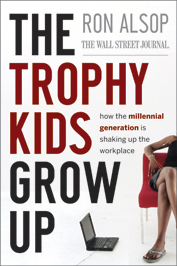 Of course, everyone knows that you have to get the higher grades to be college-eligible, but, nonetheless, you can still be a high school graduate without ever doing your “best” work.

In the real world, the only grades that count are “A+” and “C”.  To get a promotion you have to be the best of the best or an “A+”.  Even if you’re slightly above average, it counts for nothing.  You get little recognition and seldom get promoted.  To make sure you get to keep your job you have to be at least “C” or average.  Anything less than that and you’re considered a failure and will likely end up on the chopping block.

There has been a lot of debate among educators and parents on this very topic.  I just think that the focus should be on the joy of learning and less on the need to get perfect grades.

Everyone rises at the same pace

Each child must spend one year at each grade and cannot skip ahead.  Occasionally, some smarty pants will get to skip a grade, but everyone will know why.  “He got a 1600 on the SAT in 7th grade!”

In the real world, some people get promoted multiple steps without any explanation at all.  Sometimes it is obviously for merit, but other times, it may just be a matter of being in the right spot at the right time.

I don’t think it makes sense to accelerate children through school because they need to be mature before facing the real world.  However, somewhere in the curriculum someone should explain that success may come sooner for some than others and that the only real measure of success should be your own metric.

I am being a bit facetious here.  I’m doing just fine in the real world.  And don’t let my grammatically incorrect blog post title fool you –  I did very well in school.  Obviously, I learned enough to use big words like “facetious”, which is a word I use frequently in the real world…

Trophies for participation and a generous grading system may have let achievement come too easily.   I was a great student and got mostly “A’s” simply because the “A’s” seemed quite attainable.  It’s as though we were given permission to set the bar low – a height that I grew accustomed to.

It has taken me a long time to realize that really successful people keep setting the bar higher for themselves without anyone setting it for them and that true ambition and drive propels one toward reaching goals – not recognition.

Disclaimer:  I am fully aware that my tune will likely change when my son is in school and particpating in sports and activities.  I’ll want that little bugger to feel good about himself and get as many gold dust-collectors that make him happy…